As I look back on 2015, I realized that the year had me very busy. I had been to more places than I ever did in any of the previous years. I had visited 4 provinces this year (Batangas, Rizal, Pampanga, Quezon), I have watched 16 movies in Cinemas – thrice I watched alone, and I have read 9 books by best-selling Authors. Below is the list. 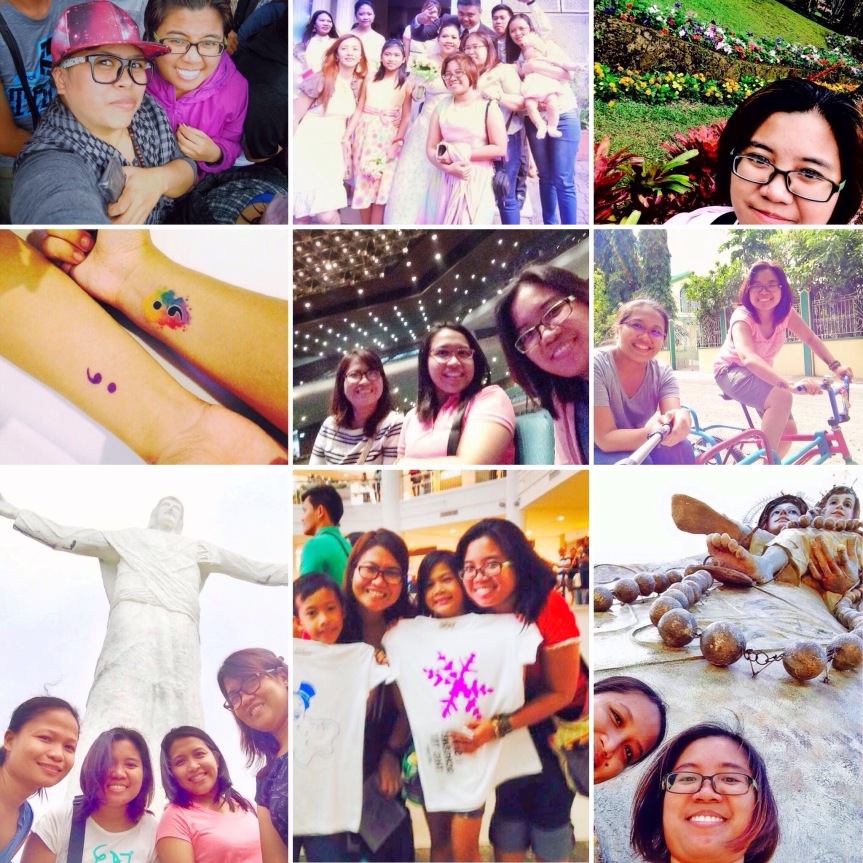 2015 was the year when I started to learn to enjoy my own company – doing Sunday morning jogging alone, watched movies alone, and for the very first time in 31 years of my existence, I traveled more or less 84 kms, 2 hours 15 minutes  (as per Google) away from home to Caleruega. Well, it may not be that far for most people, but it was a start for me. I have never traveled alone in my life. The experience was scary at first but as the day progressed, the feeling changed as I start to enjoy and be comfortable with my own company.

In February, I left my employer and started the same work/role in another. It was a new environment but with the same people I have known in my very first employer that had been home to me for more or less 6 years. It felt home – same people, same type of work, the only thing that changed is the name of the company where we now work. I miss my last company in terms of people (I work with “kids”, 8-10 years younger than me) and the place where it is located (almost like a neighbor). But that’s life. Sometimes we just have to leave not because we want to, but we badly need to.

Good times – I had so much of it! 2015 is when a new tradition has started – “payday weekend getaway”. Once a month, I try to go to places I have never been or do things I’ve never done, or eat out where I’ve never tried before. I do this with one of my close friends, Charitie, who is ever so ready (except when she’s caught up with work). I am usually the one who researches for places and how to get there. When it comes to new food, she’s the one I can count on. Hehe! I thank God for friends like Charitie – she’s really one text away. We have developed this attitude that if we want to do something, we’ll do it as soon as possible if not right away – makes it more fun. This is because, if we put the things we want to do for some other (far away) day, then we might be too lazy to do it or would have changed our hearts by then. And besides I believe that “next times are always too far”. So why not, do it right then and there the moment we thought of it?

Apart from learning to be with myself and having fun, I have become, I guess, more faithful (in terms of belief/religion). I am a Catholic – but not really a “devoted” one. I go to Church, but not religiously every Sunday. I am not a religious person, I only try to do good deeds that please Him. I, sometime in my life prayed for God to send me someone who would help me be closer to Him. He answered that prayer in 2015. I met someone at work, later became a close friend, who invited me once to attend Bo Sanchez’s The Feast. Well, at first I refused the invitation though I really wanted to try attending.

In October of this year, I finally got the urge and willingness to attend The Feast. Well, 90% of the reason was because the topic of the talk session for the whole month of October (my birth month, by the way) was “How to Get Rid of Jerks and Jerkettes” – a talk for the Singles. Haha! I knew that my friends Charitie and Dharyl would also be interested so I invited them to join me. I officially started attending the feast then – it was October 4.

The friend who initially invited me to The Feast months before October said that if the talk had not been for singles, my friends and I wouldn’t have attended the Feast in the first place. Well, party true (I told you, 90% of the reason was because of that). But I proved that wrong! Because I still attended The Feast every Sunday even after October (even going there alone), until the last Feast for this year which was last December 27 at the PICC. I am planning to attend the first Feast for 2016 on January 3 – it will be a very good and meaningful start of 2016 for me. I also want to attend on the coming Sundays after it. So help me, God. Really, hearing Bro. Bo talk is a blessing!

You would think that God’s answer to my prayer (someone who’d help me be closer to Him) was the one who invited me to The Feast first, for I thought that way too. But if I think about it now, I AM the answer to my own prayer. It was I who constantly fought sleepiness and laziness every Sunday morning. It was my own willingness to be blessed. It was I. It was I (plus Bro. Bo) who helped me become a little closer (than ever before) to God.

After resting for 4 years – heart at peace, just enjoying crushing over some tall-not-dark-and-handsome. Ooops, mind you, I was never in a relationship, just used to loving someone secretly. Sometime this year, my heart and I fell.. and just fell (then got up eventually on my own). Haha! I won’t dwell on it so much in this blog post. It’s just like what I read from Khaled Hosseini’s The Kite Runner book, “It was not meant to be, or, maybe, it was meant not to be.” Lesson learned? Well, hmm.. just enjoy each moment. Enjoy each moment and never expect that something really beautiful, other than a super friendship, will bloom from those moments. I’m just keeping my head and spirits high, knowing that my one true love (should there be any) is just somewhere out there. Maybe we’re both not yet ready to meet each other, that’s why the meetup is taking so long. I’ll meet him when we’re both ready – when God finally allows. 🙂

Overall rating for 2015? 9 out of 10! My best friend Cleigh and I saw Pope Francis in person (had eye contact with him for 2 seconds hihi) this year in January and I found a home in The Feast Bay Area, realized it only this December, plus I got Happy (my new puppy) – so it’s really a 9. 🙂 I aim to give 2016 a perfect 10. God willingly, let’s see. *fingers crossed* *winks*

I may exit 2015 with almost empty pockets (yeah.. because of tax adjustments), but I’m sure will enter 2016 with filled soul and a happy heart! 🙂