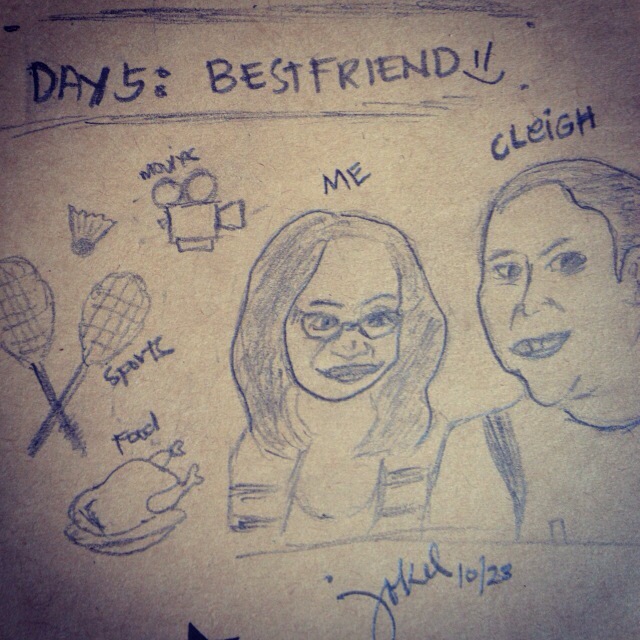 A super bubbly, positive person I met 7 years ago and been friends until now. She’s the opposite side of me in a lot of ways like:
– I’m pessimistic, she’s super optimistic
– I don’t speak lot, she does 🙂
– I’m a quiet person, she’s not.. but in a good way of course! Or else I’d hate her. Joke! (because she really knows that I hate super loud (literally) or noisy people)

She’s one of my first best friends in the IT world. Hehe! She’s been there for me in all these years – good times and bad, happy and sad.
– She’s the first one I guess who have seen me cry. It was in the rest room, surprised and without saying a word, hugged me. :’)
– She was the first one to know that I lost my Nokia C3 cellphone. She went to my office cubicle at once and took me to the rest room and chose to console me OVER the FREE First Friday Breakfast in the office. A true friend.. Really! :))
– She was my first competitor during the first badminton tournament that we joined. We were not that close during that time. Then we became badminton partners since after the tourney. 🙂
– We’ve been badminton partners – win or lose. We were partners when we won the Championship for Retail Badminton Tournament Women’s Division – it was my last game in Accenture before I left. 🙂 That’s one happy memory to keep! 🙂
– She was there during that one sad night I was crying hard and took me to Chowking after work and we ordered Set B meal (good for 5 persons) just for the two of us. I was still in tears then but when the waiter got to our table to set 5 plates, we looked at each other and laughed. 🙂

What we do best together? Spend the day or half the day with this itinerary:
– Go to a diner and order a meal good for more than the two of us. We’re foodies! More or less an hour at a diner trying to finish all the food while catching up with each other’s life – from bad to good news.
– Watch a good movie – from Will Smith to John Lloyd (hahahaha) to cartoons to action. Any movie will do, she knows the good ones! 🙂

There. Never a dull moment with Cleigh.

Thanks to her, I am partly friendly-partly positive now. Haha! *winks!* 😉

However… there’s just one thing I believe we can’t do together… a friendship tattoo, or else, baka magagalit si INDAY (her mother)! –my thought bubble hehe!